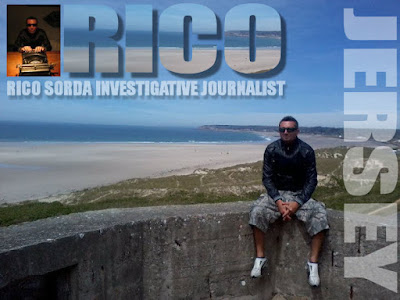 Where to start about this school and the music teacher Chris Bacon. Previously to Starting at D'Hautree in 1980 I had been at St Saviours primary school. I loved it. The teachers were great - I had no complaints. Then it was time for senior school. I was going to D'Hautree - the secondary school that was situated half way up  St Saviours Hill. It had previously been called St Helier Boys School. We were to be the last all boys year. It was like walking into the Bronx.

As a shy quite kid this was a serious wake up call. I knew nothing about this school. All of a sudden you are thrown into an environment where self preservation and knowing who your friends are really counts for something. The only teacher I had heard of before that first day was a Mr Goodyear who had come to our primary school and conducted what now seems like a selection process as to who was good at sport and who wasn't. If you were good you went into the House he represented if average or crap you went into the others. Little did I know that in the space of couple of months that I would be in this teachers office having the choice of 3 canes to select from. I remember red tape on the end of one. I managed to blag  my way out of it and thought no thanks. He looked like he would have enjoyed it.

So there you are. Standing in the playground at break time. You look for your mates and you hang.  The 'Smokers' are hanging down by the music block. We sit on the top wall that runs along the top of the concrete playground before you enter the grassed bit where the cricket nets were situated. Trying to stay out of trouble and not becoming at target of the bullies was a must for me. I was not built for war.  On a number of occasions, especially in my first year at the school you would hear the tribal chant of FIGHT FIGHT FIGHT ring out and the circle would close. This was combat at close quarters. Names are not important but I remember them well. Proper fights, real violence, pupils against pupils and pupils against teachers. It was all going off. Then you went to class. Must of the lessons were ok some of the classes were totally lawless. The year would gather in the lecture theatre once a week for a briefing. All you can hear is feet rubbing and static electric shocks sparking off your ear or off to the planetarium to look at the bloody stars but knowing as soon as the lights went out all hell and phlegm would be dispatched. Those were the lighter moments.

Then  there was CYRIL.

Cyril was a Holly bush. You would never ever walk along the path from the bike sheds to the music block during break time or lunch break in case you were told that you were going to meet Cyril. To be thrown into Cryil is one thing but to clear Cyril meant you would be landing on St Saviours Hill and taking your chances with the oncoming traffic… Thank god I never met Cyril.

If all that wasn't bad enough my 1st year form teacher scared the living daylights out of me. Mr P.H.Meyrick. I would liken him to Quinton Crisp. Very Camp and very brutal. You sat in his form class - you looked forward and you didn't mutter a word unless required to do so. Those who did or those who were stupid enough to mock him were met with the immortal phrase of "Don't you snigger at me boy" Those are the words you would here before his ringed fingers would snap across your skull like a cobra strike from behind..

The two things I loved most at D'Hautree was music and sport.

I loved the Guitar and wanted to learn to play the Guitar. I Loved music lessons for this reason. A lot of mates just used it as an hour of free time but I loved it.  My friends in the year above, who I knew from living in St Martin, warned me about Chris Bacon. All the jokes about not bending over for him, he will bum you etc etc. Everyone knew. I can't remember how long into starting D'Hautree but I knew his reputation. Just like I knew not to walk past Cyril and not to piss in the middle urinal or use anything in the middle as this would result you being called a derogatory Jersey name.  You just knew that Chris Bacon was a bit off the garden path. That's what it was back then. If we all knew then the teachers must have known. There were boys who would hang around him down at the music block for whatever reason.

When news broke of Chris Bacon being convicted in the Royal Court for messing with former pupils it reminded me of the time he pulled me out of class for no apparent reason. Sorda come with me is all that I heard. Up I get and follow him to the room where all the trumpets and guitars were hanging up. I believe this might have been the sound proof room. In I go thinking what the hell is this all about when Bacon Say's bend over you have been a naughty boy. "Not a chance said I. I have heard all about you." From out of nowhere he had a shoe in his had and hit me once or twice across the small of my back and told me to get out. Didn't think twice about it as I walked out but now know he was getting off on it. What a bloody school. What a bloody sicko.

I have mixed feelings about D'hautree. Loved some of it hated most of it. Liked some  of the teachers disliked others. There were some real characters in my year. All no doubt with a story to tell.

But how Bacon was allowed to get away with it for so long should leave some teachers having a good hard look at themselves.